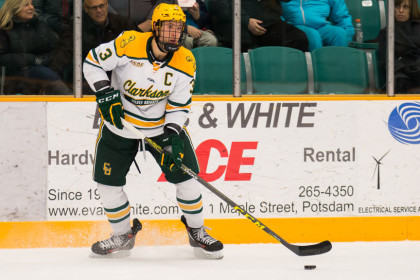 ALBANY, NY – The Albany Devils have signed defenseman Paul Geiger to an Amateur Tryout Agreement. The announcement was made by Albany Devils General Manager Tom Fitzgerald.

Geiger recently completed a four-year career at Clarkson University (ECAC). This past season, he appeared in 35 games for the Golden Knights, registering 13 points with five goals and eight assists. He served as team captain for the second consecutive season.

The 23-year-old finished his 150-game collegiate career with 13 goals and 38 assists for 51 points, while amassing just 70 penalty minutes. During his junior season, he received Clarkson’s Fran Neragin Award, which is presented to a player who displays unselfish play and sportsmanship both on and off the ice. Additionally, during his freshmen year, Geiger was named to the ECAC Hockey All-Rookie Team. He was a member of the ECAC Hockey All-Academic team during the 2012-13, 2013-14 and 2014-15 campaigns.

Prior to Clarkson, Geiger played three seasons in the OJHL with Markham and Stouffville. He was named the league’s top defenseman in 2011-12 after averaging 1.26 points per game for 54 points in 43 contests. That same season he garnered OJHL First All-Star Team accolades.