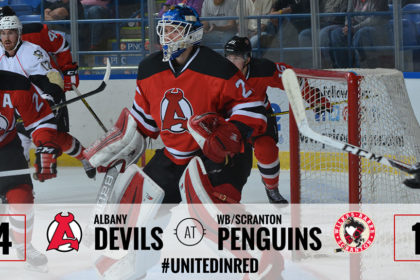 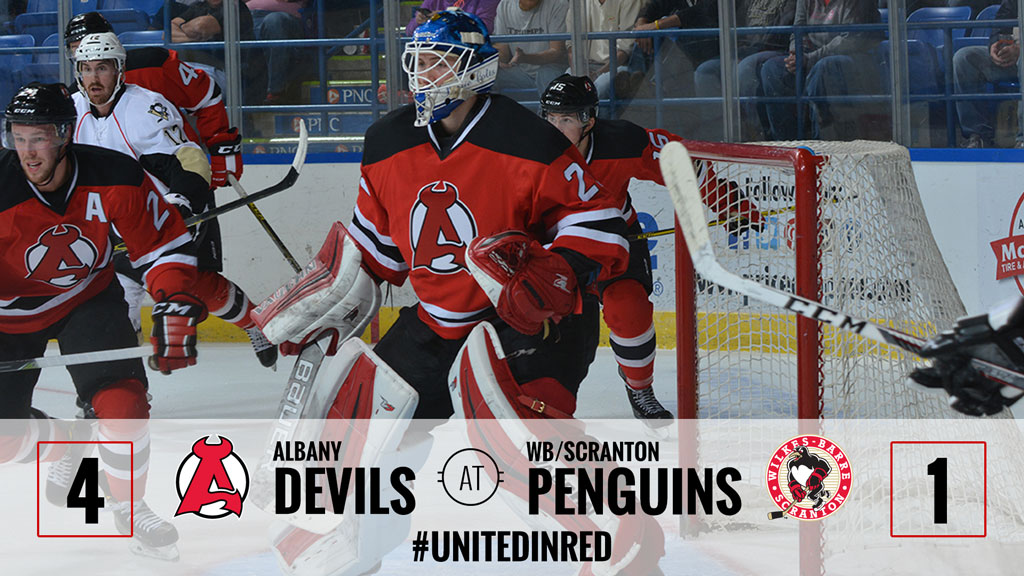 WILKES-BARRE, PA — Thursday’s Albany Devils game against the Wilkes-Barre/Scranton Penguins may have been just an exhibition, but the Devils’ power-play was in midseason form. All four of Albany’s goals came on the man-advantage in a 4-1 victory at Mohegan Sun Arena.

Jan Mandat, John Quenneville, Ben Sexton and Ty Loney — all three newcomers to the Devils’ lineup — were responsible for the tallies. Rookie netminder MacKenzie Blackwood was near perfect, stopping 23 of 24 shots.

Mandat opened the scoring at 12:41 of the first period from Mathieu Brodeur and Ryan Kujawinski.

Wilkes-Barre/Scranton’s Reid McNeill followed at 5:02 of the second period, but Albany responded off Quenneville’s stick before the intermission break. Rookie defenseman Josh Jacobs found the New Jersey Devils first round draft pick at the left face-off dot for a one-timer at 15:12.

In the third, Sexton cashed in downlow from Mandat and Max Novak at 1:14. Loney capped the scoring with 8.2 seconds on the clock.

The Devils conclude their preseason schedule Sunday with a 1 pm contest against the Hartford Wolf Pack in Cromwell, CT.