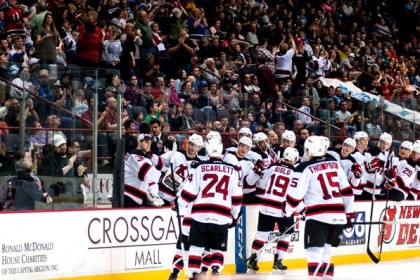 ALBANY, NY – The Albany Devils are preparing for their sixth year in the Capital Region after signing an agreement for the 2015-16 season with Albany County and Times Union Center. As per club policy, no further terms were disclosed.

“We are very much looking forward to our sixth season in the Capital Region and being able to provide our fans family-friendly entertainment and high-energy excitement,” said Albany Devils CEO Christopher Ciceri. “Once again we are dedicated to providing one of the best values in the American Hockey League. We are anticipating another action-packed year, starting with our Home Opener on Saturday, October 24th.”

“On behalf of Albany County, SMG and our entire staff at Times Union Center, I am very happy to be able to state that we have an agreement that will keep the Devils in Albany,” said SMG/TU Center Regional General Manager Bob Belber. “They will play their home games for the 2015-2016 AHL season here at Times Union Center”

The Devils serve as the top developmental club for the three-time Stanley Cup winning New Jersey Devils of the National Hockey League. The AHL Devils are owned and operated by the parent team.

Season Tickets, Flex Tickets and Mini Plan Tickets for the 2015-16 campaign are on sale now and can be purchased by calling (518) 4-DEVILS.