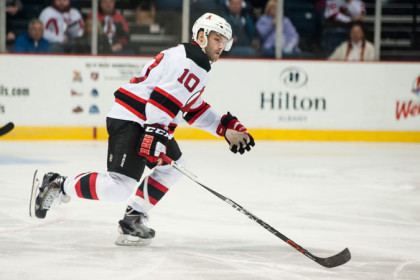 Both players missed the team’s 3-0 win against Hartford Saturday with upper-body injuries. According to Kowalsky, they are “very questionable” for the weekend.

Vojtech Mozik and Graham Black, who also missed Saturday’s game, are cleared to make their return.

The Devils are about to embark on a busy week, which consists of four games in six days. They will be juggling the lines – specifically at the center position – moving forward.

“This week we are going to need fresh legs with the travel and the amount of games,” Kowalsky said. “Black is a natural centerman and O’Brien is our only full-time centerman in the lineup right now. I think we are going to constantly be tinkering. With Rod Pelley out you take out a big-time faceoff guy and your number one penalty killer out of the lineup. We are going to continue to look at this and see how some of these young kids go.

“As far as our top six go, we might move those guys around just to spread somethings out depending on how we are playing. The last two games there haven’t been a lot of penalties which I really think helps our game so we can get all four lines involved. It’s always a work-in-progress with the lines.”

Albany currently has 27 players on roster. With Blake Coleman and Scott Wedgewood already sidelined and the additional injuries to Gragnani and Pelley, the team will have three extra bodies – two at forward and one on defense.