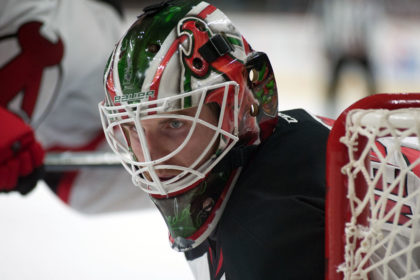 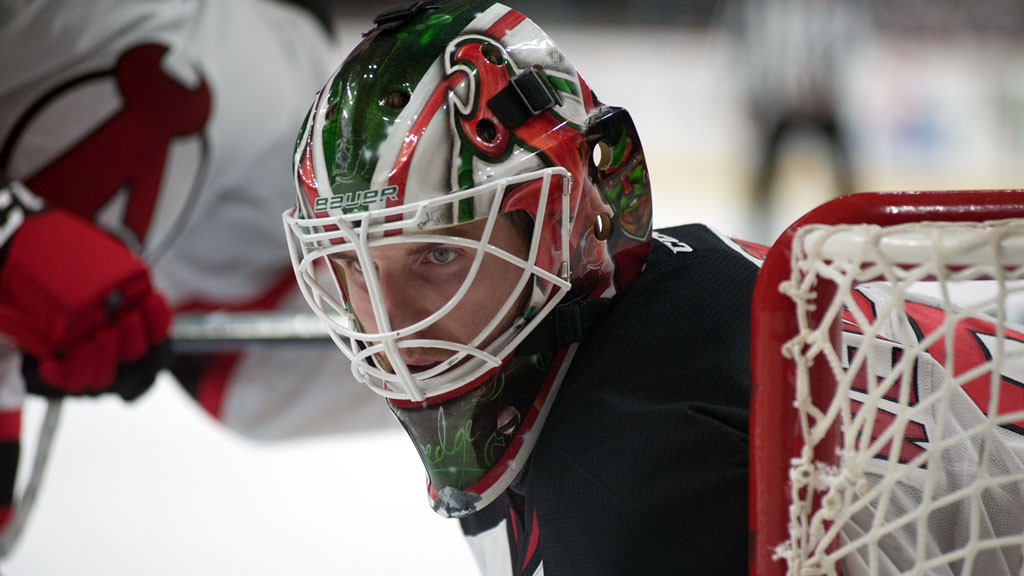 ALBANY, NY — Scott Wedgewood did not practice with the Albany Devils Monday as the team prepares for their 7 pm contest against the Toronto Marlies Tuesday at Times Union Center. Wedgewood left Friday’s game at Binghamton during the third period. He did not dress during Saturday’s outing at Syracuse. 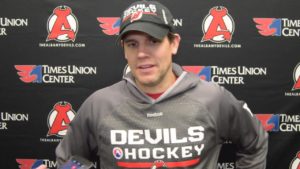 He is being ruled out indefinitely with more information coming later this week. Wedgewood suffered a similar shoulder injury last season that sidelined him for a month and a half.

“It’s the same thing as last year and that’s not a good thing,” said Head Coach Rick Kowalsky. “We’ll hope for the best, but being through something like this myself, every time something happens it’s tough to come back from. We’ll know more as the week transpires here. He’s certainly for now out indefinitely.”

With Wedgewood unavailable, Ken Appleby was reassigned from Adirondack (ECHL). This season, the 21-year-old has the fifth best goals-against average in the ECHL at 1.98. He is 4-1-0 with a .915 save percentage.

Appleby has played one game in the AHL this year, posting a 26-save victory in the Devils 3-2 shootout win against Binghamton on Oct. 21. 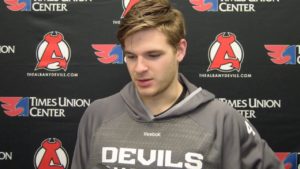 He now makes up a goaltending tandem, which also features rookie Mackenzie Blackwood.

“It’s very unfortunate what happened to Scott,” Appleby said. “We don’t want to see a guy go down, but I think it’s a good opportunity for Mackenzie and me. If I get into some games, I’ll try and play as good as I can and get the wins for the guys.”

The Devils dropped both their games this past weekend: 6-2 at Binghamton Friday and 3-2 at Syracuse Saturday.

“Friday, we were not good,” Kowalsky said. “We were not ready. They were and they were a desperate team, but we shot ourselves in the foot with a lot of the goals. Saturday, we got better against a good hockey team that also lost big the night before in Hershey. I thought we responded well.

“There are still some areas and details in our game and some compete level and hardness in certain areas we can still work on. We had a lot of opportunities to score late in the game. I think the biggest thing is losing the way we did — that late. Not getting a point out of there, which I thought we deserved. It certainly stings, but we can’t carry that into tomorrow.”

Newcomer Petr Straka and Joe Blandisi led the team during the weekend with two points each. Straka had a goal and an assist and Blandisi had two helpers.

The New Jersey Devils wrap up their four-game Western Conference road trip Monday with a 10:30 pm matchup against San Jose. During their last outing — a 4-2 loss at Los Angeles — Nick Lappin scored his second career goal.

During that game, Lappin was moved to a top-six forward role during the second period.

The 24-year-old earned his first career NHL recall on Oct. 28 and has three goals and two assists in 11 games. He began the season in Albany and had a goal and a helper in six outings.