Notebook: Line mix up; No pressure for Quenneville 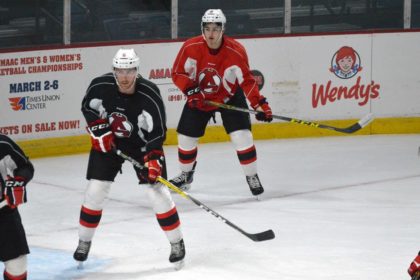 ALBANY, NY – Another hard practice was instore for the Albany Devils Wednesday at Times Union Center. The team will have played just one game during the seven days by the time it hosts the Hershey Bears Friday at 7 pm. Head Coach Rick Kowalsky is using the time for implementation, conditioning and to experiment with line combinations.

The hope is to spark some of the players who are trying to find their rhythm.

“It’s more about just trying to get some guys going,” Kowalsky said. “We haven’t been bad, we just have to be better and get some guys going. Joe Blandisi is one of them. Blake Pietila has been pretty solid and we’ve moved some guys around. We’re asking a lot out some guys like a Ben Sexton and Blake Coleman, who may have a little bit different roles if we had some of our depth up.”

• QUENNEVILLE NOT FEELING THE PRESSURE

Being a first-round draft pick playing in the AHL comes with some baggage. Some might call it pressure; others might call it expectations. For rookie John Quenneville, who was selected 30th overall in 2014, it’s all about opportunity.

“No I don’t think I feel any pressure,” Quenneville said. “I think it’s given me some good opportunities here, but at the same time I think I realize I need to come to the rink every day with a worker’s mentality. You need to show up and give it your all and I think there’s always eyes on you no matter what. Like anybody playing in the AHL, you need to put in the work now and hopefully one day you’ll prove yourself to get the opportunity.”

The 20-year-old leads the Devils with four goals and is tied for first with six points. He is coming off a 73 point season with Brandon (WHL). In 57 games, he registered 31 goals and 42 assists. During the Wheat Kings playoff run, he played 21 games and turned heads with 27 points, including 16 goals and 11 helpers.

• WAITING IN THE WINGS

With Ryan Kujawinski back from a lower-body injury, the Devils now have two additional forwards. Currently, rookies Jan Mandat and Brandon Baddock are trying to play their way into the lineup.

“Jan has done a good job for us,” Kowalsky said. “He brings energy. I’d like to maybe look at some guys at center ice a little more, because of what we’re going through I’m a little hesitant. That might be more of an in-game adjustment, but we’d like to get him in for sure just because he brings energy and plays with some jam.

“Baddock is an option. Moving forward Kujawinski came in and he’s fresh, but we have to make some decisions. Really it’s going be these guys who tell us who plays by what they do when they get their opportunity.”