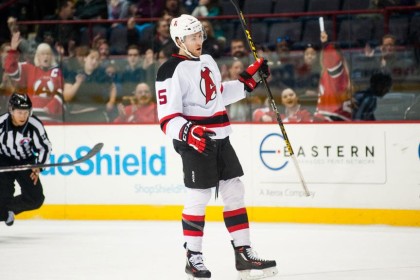 ALBANY, NY — Paul Geiger, Marc-Andre Gragnani and Graham Black each scored, helping the Albany Devils to a 3-0 victory against the Binghamton Senators Sunday at Times Union Center. The Devils, who are 42-18-8-2, set a franchise record for points in a season, earning their 94th with the victory. The 2013-14 squad — the last to make the Calder Cup Playoffs — had 93.

This year’s team set another franchise record with its 10th shutout of the season. The 2013-14 club, which had nine, fell victim again.

Scott Wedgewood and Yann Danis combined for the blanking. Wedgewood left the game after 47:11 of play after taking a shot to the facemask. He made 15 saves for his 11th victory of the season. Danis supplied 12:49 of relief and stopped four shots.

Geiger’s goal, which was the game-winner, was the first of his career. The 23-year-old out of Clarkson University signed an ATO Mar. 16 and has appeared in eight games this season. Gragnani also tallied his first goal of the season. Despite going goalless in his first 52 games, he still ranks fifth on the team with 31 points. Black’s tally was his sixth of the season.

Albany controlled play for most of the game, owning a 42-19 shot advantage. However, it took nearly 40 minutes for the Devils to finally beat Binghamton’s Chris Driedger. Geiger kept the puck inside the zone at the left point and sent a shot low into the back of the net at 19:30 of the second period.

In the third, Gragnani scored at 15:16 from Thompson and O’Neill for a two-goal cushion. Black capped the scoring into an empty net at 19:30.

The Devils travel to face the Syracuse Crunch Friday at 7 pm. Fans can follow the action online at ahllive.com or over the airwaves at 104.5 “The Team” ESPN Radio. 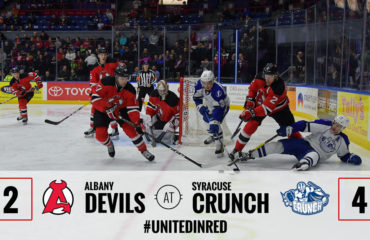 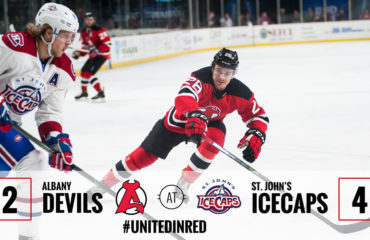